"Can we make video call so that you can stop calling me scam?"

on October 18, 2019
Yes we did video chat.  Whenever I do this with this fools it is hilarious.  But I'll tell you about that after you read this. 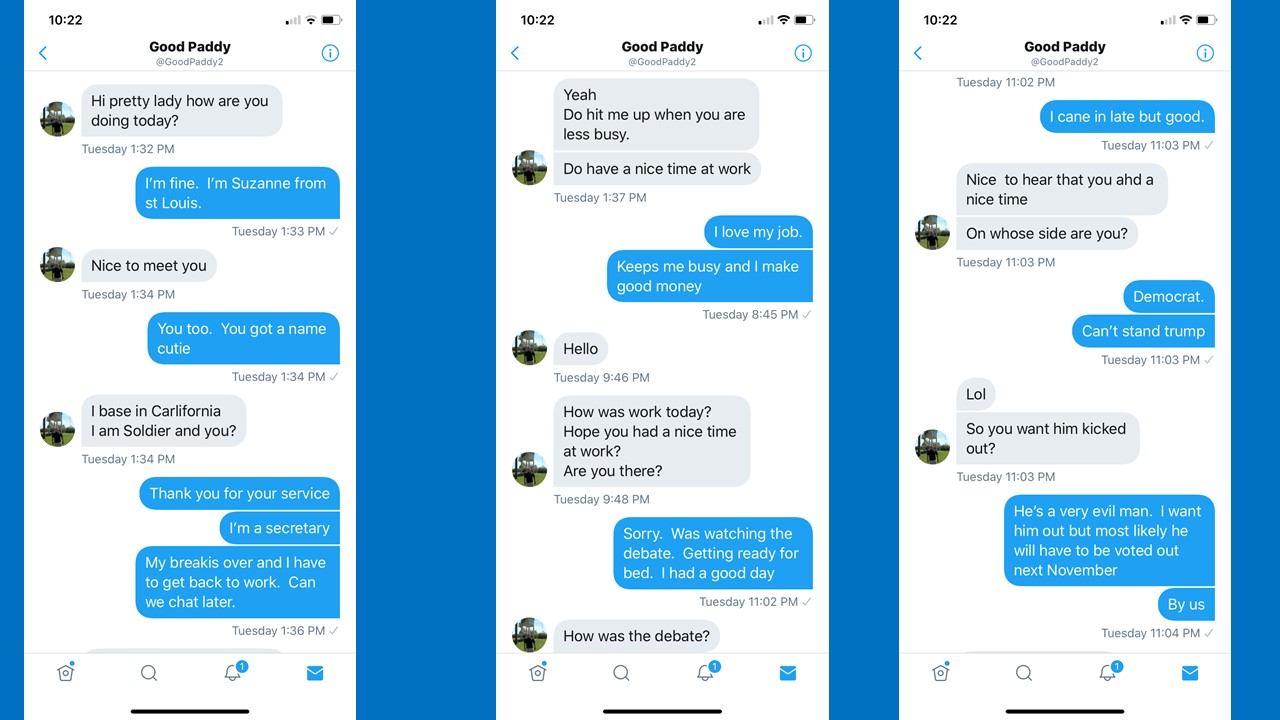 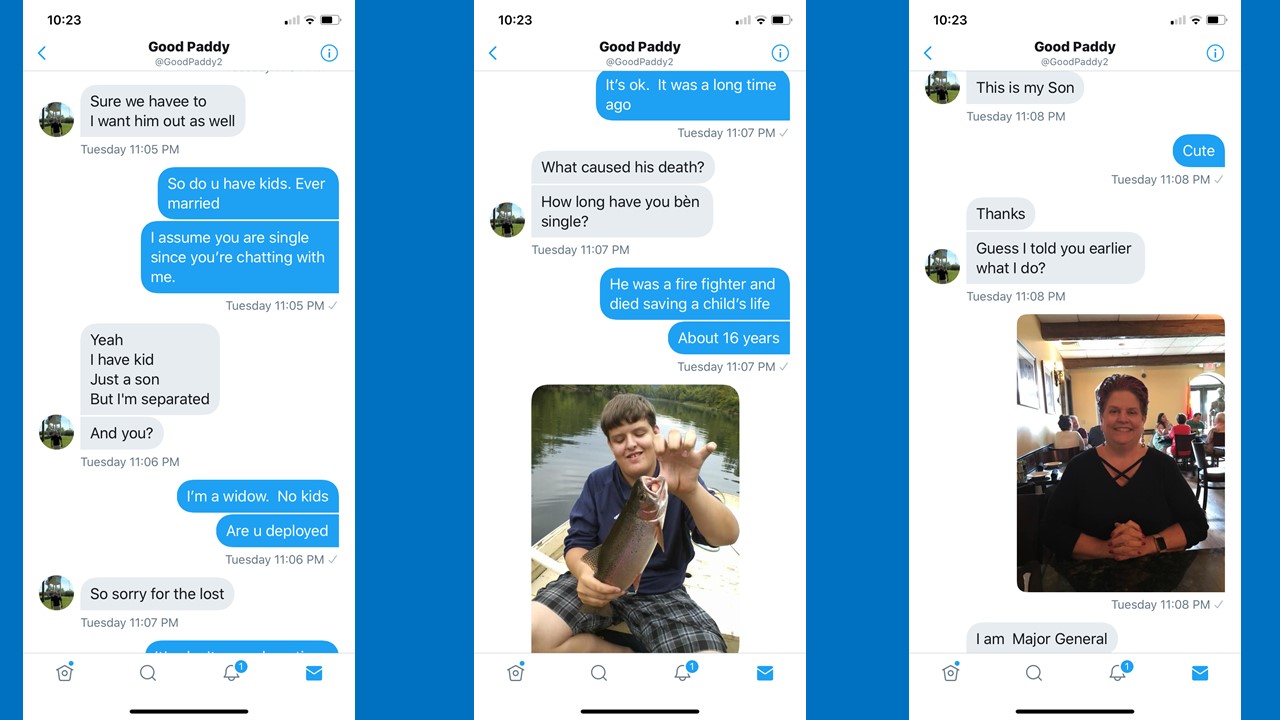 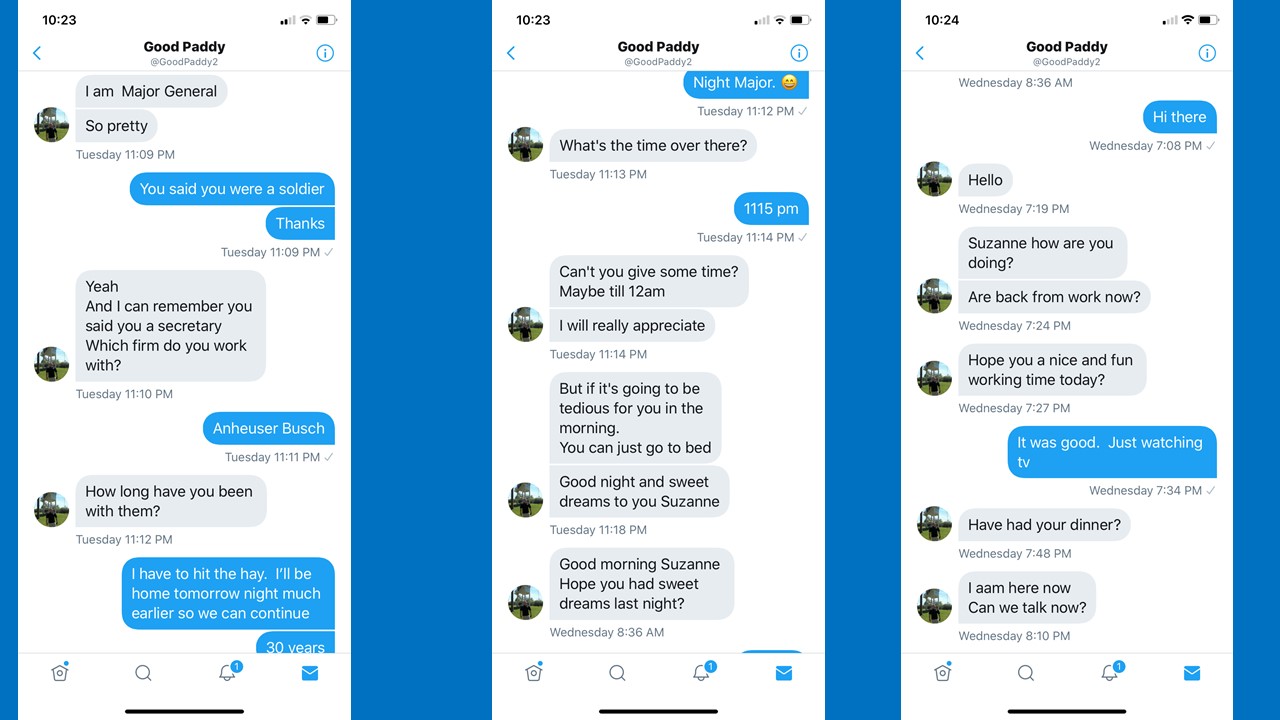 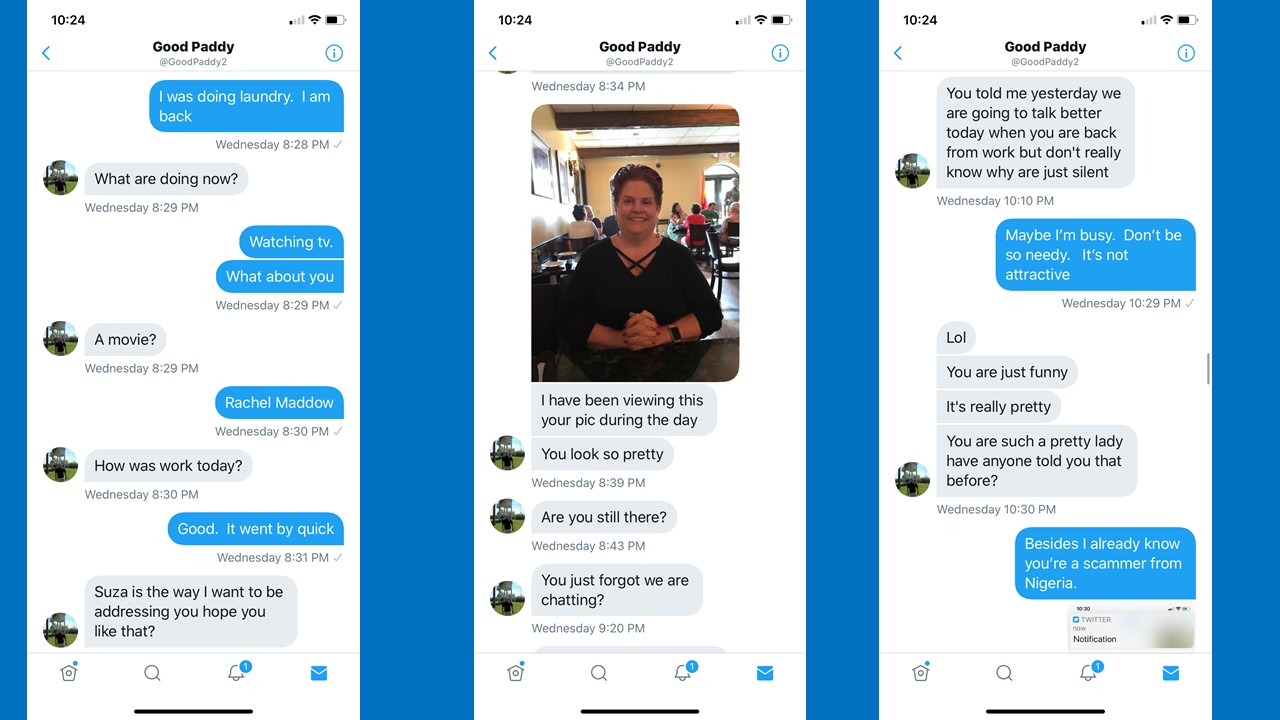 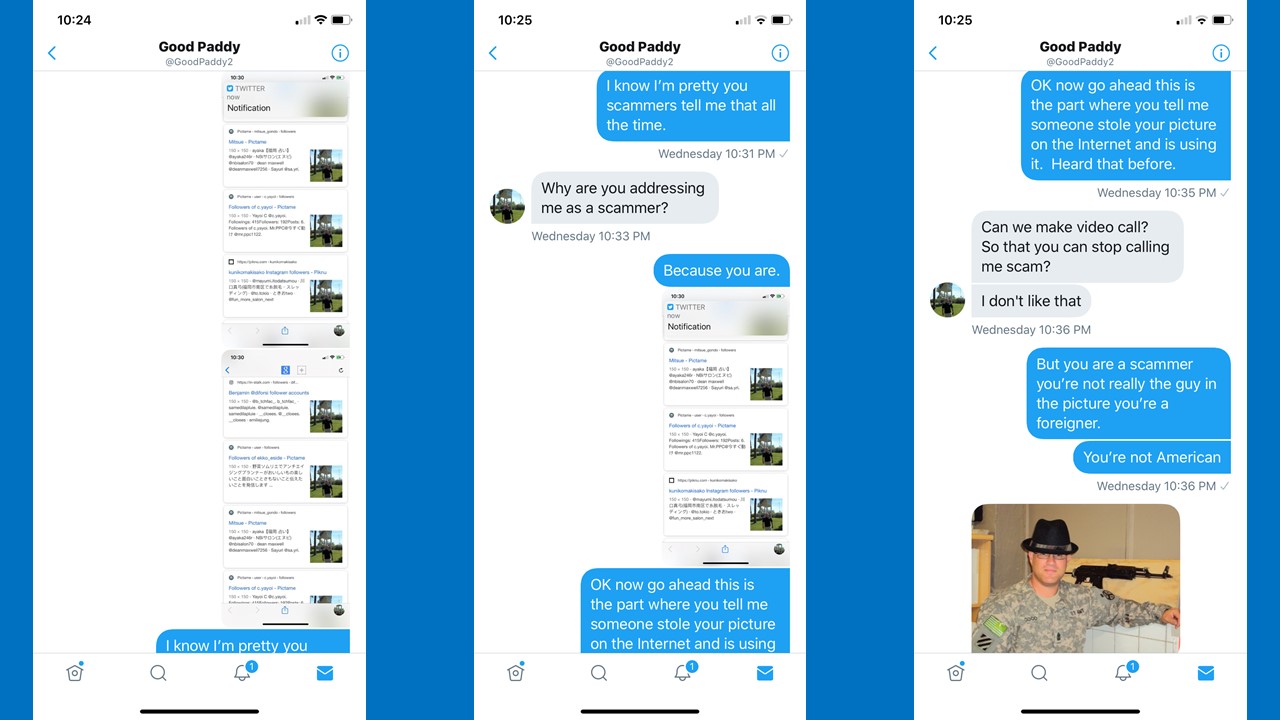 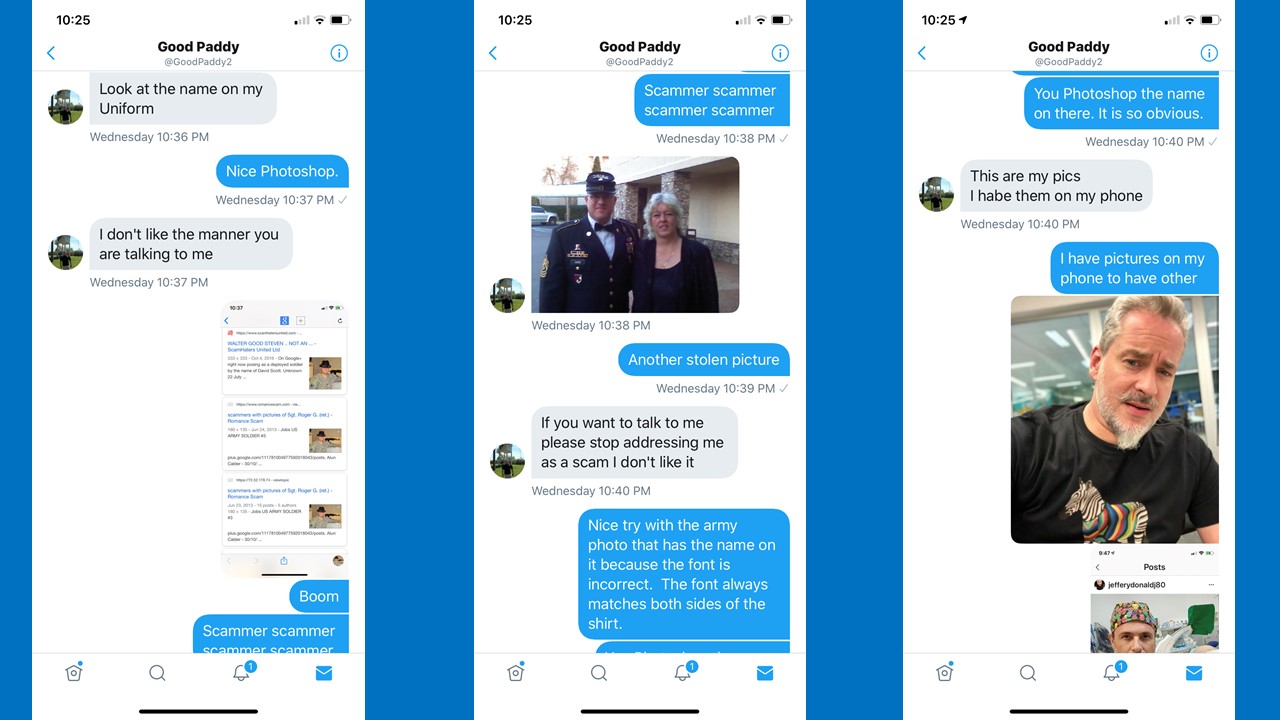 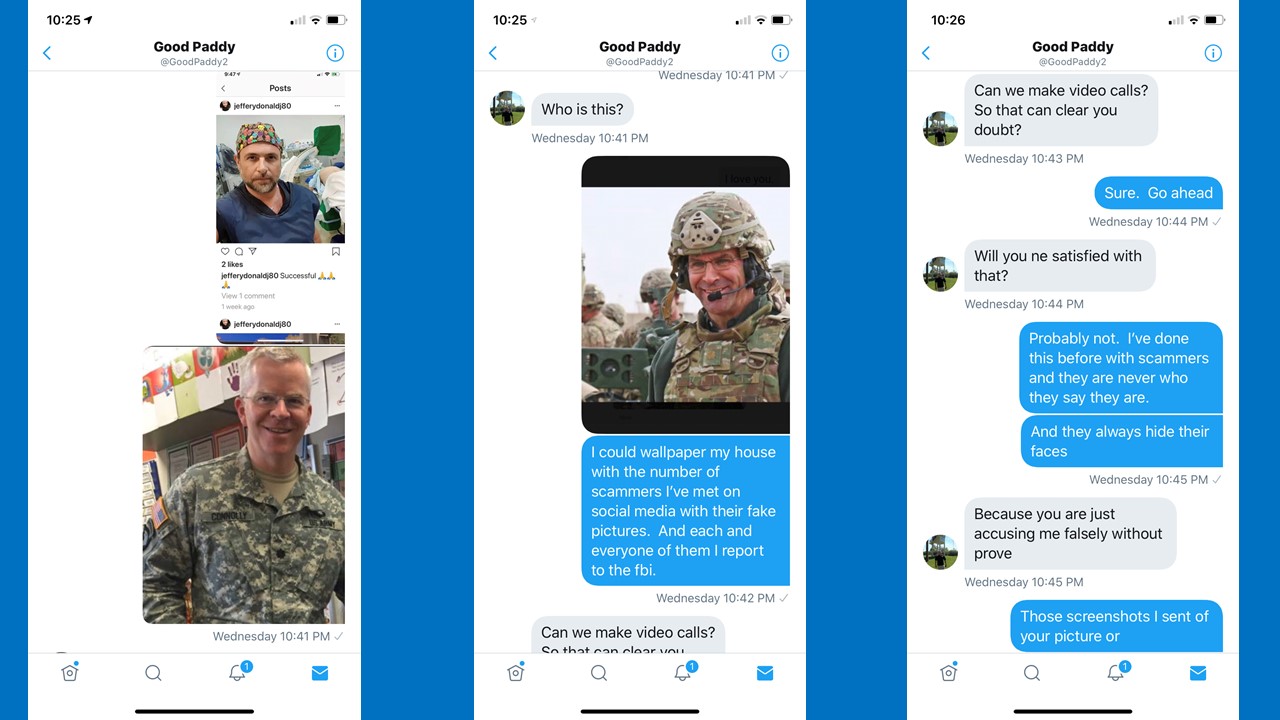 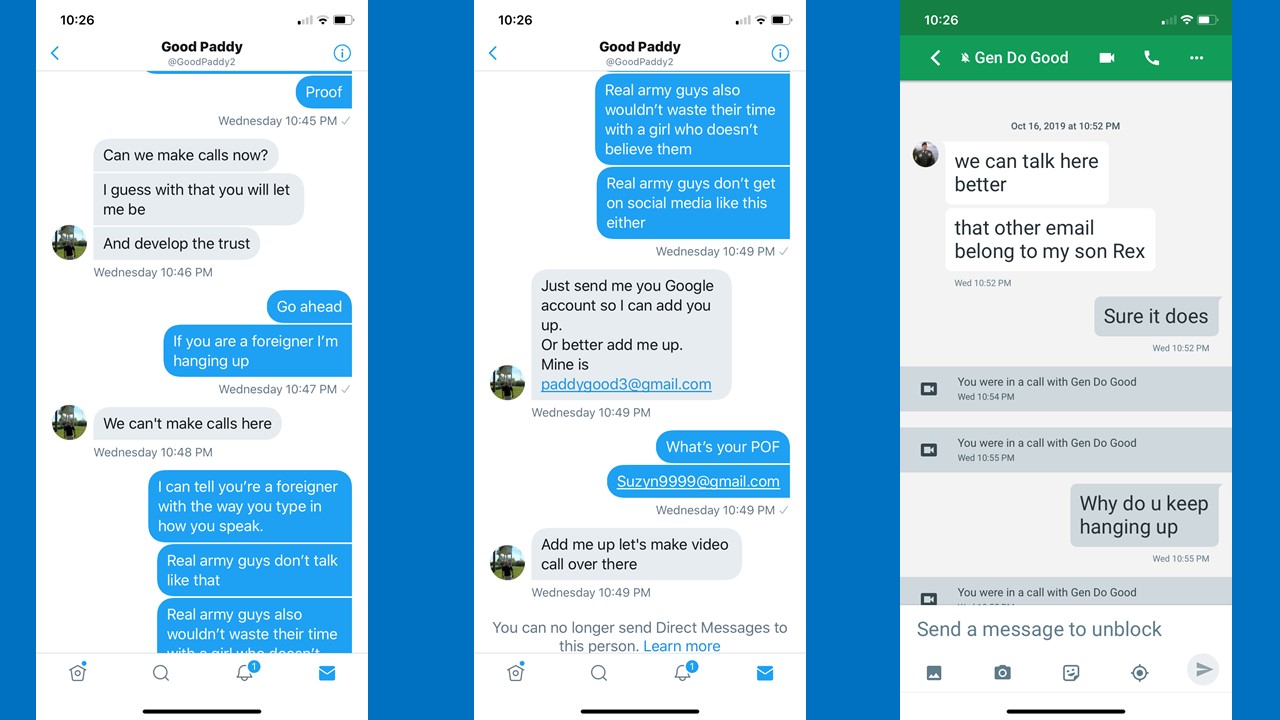 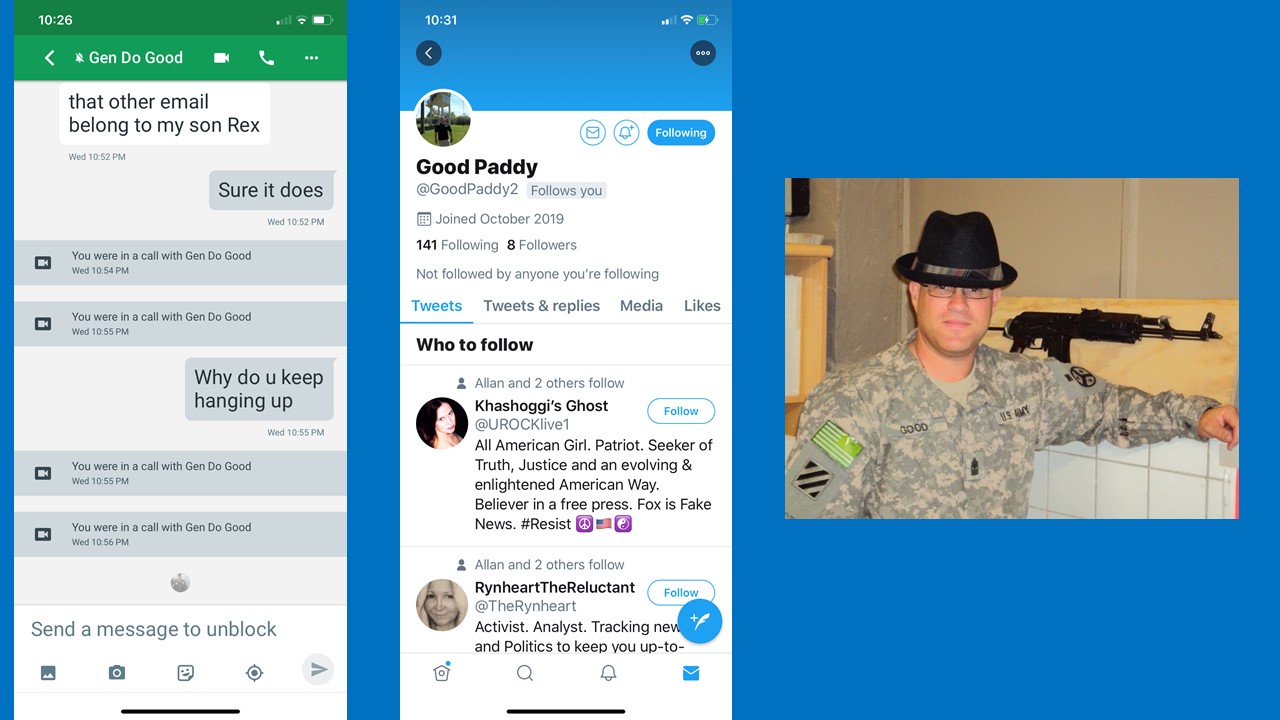 Okay so we moved to google hangout so we can video chat.  These guys suck at it.  It before I was going to bed so I didn't have any lights on while on my phone.  So he calls a couple of times and I answer and he hangs up.  (As you can see on the slide above).  So finally he calls and has a very bad video of what could be guy without a shirt on.  But the voice totally didn't match.  He was talking but the guy in the video didn't say much.  And of course it was a foreign voice.  He kept saying he couldn't see me.  Probably because I wouldn't let him.

This was so poorly put together.  I'm just shaking my head.

"I need your help to receive my money" What? No sweet talk first?

General Douglas M Fraser asked me to help him get his money.  I was so excited to help a service man.  Yeh right. The funniest part of this is, at the same time this Gen Doug is messaging me another dude using the same name and pictures starts messaging me. I thought this is gonna be fun.  Unfortunately Gen Dough #2 did something and his profile was suspended.  Oh well, Doug #1 was fun. Let's read this together. S o wasn't that a lovely read?  LOL!!!! Now first off, if this is military email, it wouldn't be a gmail account.  We know that right?  Of course you do!!!! NEVER SEND MONEY YOU DON'T KNOW!!!!

Okay, the trolls are out in full force.  Poor Chris Evans.  I've had 3 Chris Evans fakers now.  I posted a note on his twitter and the 2nd one about it but not sure he will even see it. Anyway, here is the latest conversation.  Again I exaggerate a bit.  They can make up stories so I can too.  And here we go... One note, the picture he sent me of him, I had already had found on the internet several months ago.  I knew he was fake but I played along.

Well, now there is a new scam going on (I believe).   I am still investigating.   This has nothing to do with a dating site.   My daughter and I are toying with the idea of possibly moving into a bigger place.   We drove around and also checked craigslist.   I am just going to copy the email and let you read it, then I’ll offer my thoughts and what I am doing about this.   Thanks for your email, I personally own the house, I want my property to be well taken good care of, and there are some rules and regulation in which I do give out to tenant willing to rent my house so please don't disrespect my order, But if you are still capable of renting my house the rules and regulation goes this way, You must keep my house clean including the surrounding, you must know the way in which you use the stove so as to avoid fire outbreak,you must not disturb the neighbor. I decided to rent out the property due to my transfer to (Tennessee), with the World Forum Foundation's to