Okay, I don’t know what it is, but more and more fakers are coming out of the woodwork.  I think since my last post I had about 4 more guys claiming to be in the army.  I may have said this before but it I’ve read they target women over 50 and who are lonely.  Well, this chick isn’t lonely or desperate.  But of course they don’t know that.  J
I have another one today who claims to be in the army.  I’ll let him tell me all about himself and then I’ll slap him with my story about how many guys on here have said they are in the army and really aren’t.
Again, this is disgrace to our military men and women.
I have a great idea on a dating website.  No written profiles!!  It should be videos.  You have to record a video of yourself where you talk about yourself.  What better way to show who you are.  I think you would get a better picture of the person and hear their voice and hear them speak.  Being fake would be harder.  I know some will try but maybe this would slow them down.  I love this idea.  I work in the IT department I should see if anyone is interested in creating a sight like this and I could run it.  Any takers?  I’m serious!!!!!
Don’t forget to check out my You Tube channel.

Popular posts from this blog 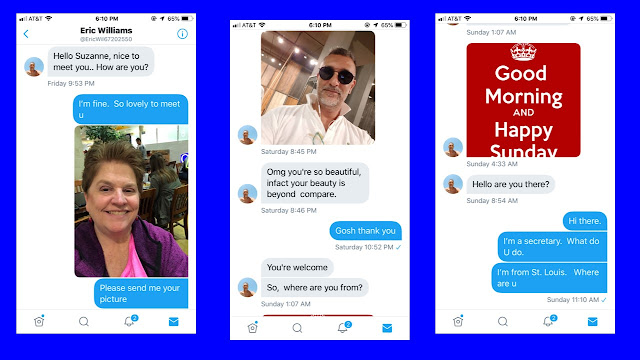 Yep, he said that.  I mean I know I'm beautiful.  LOL!!!
I was at lunch conversing with this dude and just when I was letting him have it a friend came by and we chatted for awhile and when I came back, he blocked me. No more fun with this guy.  Oh well.  There is always another one.
So enjoy...


NEVER SEND MONEY TO SOMEONE YOU DON'T KNOW!!!
Read more

- November 02, 2016
Then I moved on to Plenty of Fish (POF).
I have several POF stories but I have to tell you the one that just happened this week.
So I go through the pictures and profiles and saw a guy who looked cute and had a decent profile.So I figured what the heck I’ll send a flirt.He responded back right away and we exchanged several messages over 2 days.He said he was in the army special forces and right now he was stationed in St. Louis.He is from Valley Park.My first question I asked is what high school he went too.He told me JFK High School.So I checked and that high school is in St. Louis.Okay, so that may be true.As we chatted he mentioned be stationed here and I should have asked where, instead I said oh are you at Jefferson Barracks and he said yes.My goof there.Supposedly he has an 8 year old daughter who lives in KC and is being taken of while he is here.He said his wife was killed in a car accident five years ago.So a day later he says I should get a google account and get hangout ap…
Read more

He can't even spell "his" name right? 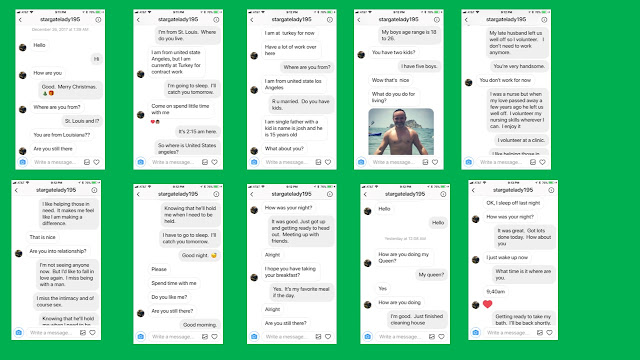 Didn't think I'd have this story to post already but I was up late last night chatting with this dude and of course I tested him, and of course he failed.  Here is the conversation.  Again, I am lying about everything about myself.  This one even more.  :) By the way, his name is:  Bryrant Fergurson and his English is horrible.  As you will see.  :)


Funny thing is when you ask for a photo a certain way to prove they are who they say they are they either get bent out of shape or just play it dumb.    This guy dumb.  He has no idea who he is trying to fool.  LOL!! ﻿
Read more