on October 11, 2017
Okay, this has to be the most crazy story.  Sit down and grab a drink cause here we go.
So all my friends know my love of Chris Evans and Chris Pratt (my cougar crushes).  I follow them on twitter.  Well a couple of weeks ago Chris Evans started following me on twitter.  (Of course we know this isn't the real Chris Evans), but I played along.  He mentioned he saw that am a big fans of his.  In the beginning I told him I didn't believe him but then I decided to play along.  So for a couple of weeks it's been boring exchange.  So this morning I get a message from him and now I would like to share it with you.  This one is a riot. 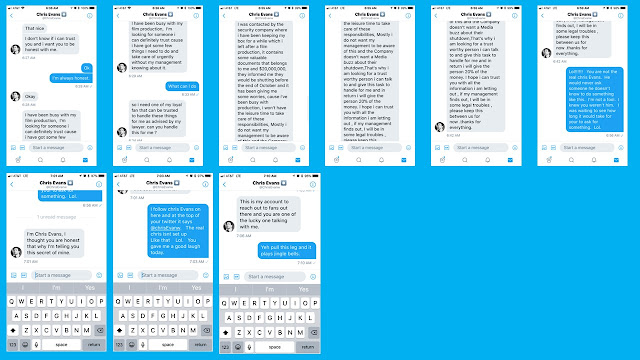 I was laughing so hard at this.  So he would give me 20% of his $20,000,000.  Really?  Did he think I would fall for that?  I guess I could have played along further just to see but I didn't and shut him down.
Here are the 2 profiles on Twitter.  You can see the difference where I mentioned it in my message above. 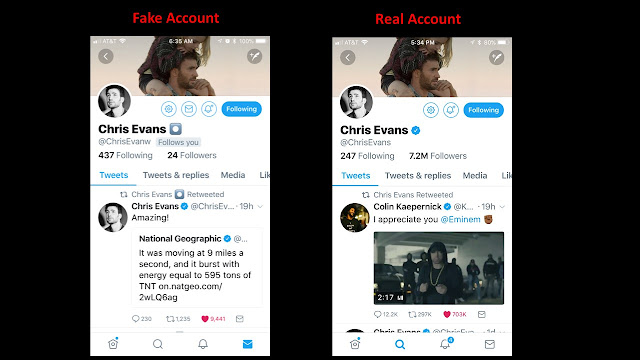 I don't really need to be on the dating site to get scammers.  I've got them on Twitter and Instagram now.  Since I joined both of those to advertise my blog, they are coming out of the word work.
Another fun day in the life of the Stargatelady.

Okay, the trolls are out in full force.  Poor Chris Evans.  I've had 3 Chris Evans fakers now.  I posted a note on his twitter and the 2nd one about it but not sure he will even see it. Anyway, here is the latest conversation.  Again I exaggerate a bit.  They can make up stories so I can too.  And here we go... One note, the picture he sent me of him, I had already had found on the internet several months ago.  I knew he was fake but I played along.

"I need your help to receive my money" What? No sweet talk first?

General Douglas M Fraser asked me to help him get his money.  I was so excited to help a service man.  Yeh right. The funniest part of this is, at the same time this Gen Doug is messaging me another dude using the same name and pictures starts messaging me. I thought this is gonna be fun.  Unfortunately Gen Dough #2 did something and his profile was suspended.  Oh well, Doug #1 was fun. Let's read this together. S o wasn't that a lovely read?  LOL!!!! Now first off, if this is military email, it wouldn't be a gmail account.  We know that right?  Of course you do!!!! NEVER SEND MONEY YOU DON'T KNOW!!!!

Well, now there is a new scam going on (I believe).   I am still investigating.   This has nothing to do with a dating site.   My daughter and I are toying with the idea of possibly moving into a bigger place.   We drove around and also checked craigslist.   I am just going to copy the email and let you read it, then I’ll offer my thoughts and what I am doing about this.   Thanks for your email, I personally own the house, I want my property to be well taken good care of, and there are some rules and regulation in which I do give out to tenant willing to rent my house so please don't disrespect my order, But if you are still capable of renting my house the rules and regulation goes this way, You must keep my house clean including the surrounding, you must know the way in which you use the stove so as to avoid fire outbreak,you must not disturb the neighbor. I decided to rent out the property due to my transfer to (Tennessee), with the World Forum Foundation's to